DALAGRO & FOOD PRODUCTS, the 19th International Agriculture and Food Industry Expo is the premier regional destination in the Russian Far East where you can discover the latest technologies in agribusiness and food sector, meet new partners, discuss the industry trends, and share experienc es. The DALAGRO & FOOD PRODUCTS Expo provides a total sales and marketing solution for manufacturers, suppliers, importers, and exporters who would like to expa nd their business presence in Russia’s Far East and the Asia Pacific.
Aimed to promote international trade and to facilitate export and import contracts during the DALAGRO & FOOD PRODUCTS Expo, the PROCUREMENT MATCHMAKING SESSION will be offered as a value-added b2b networking opportunity to meet with Russian and international manufacturers, distributors, wholesalers, and retail buyers.
We are pleased to invite international companies who are interested in marketing their products in Russia, to join the PROCUREMENT MATCHMAKING SESSION.

The 25th CITY International Construction Expo is to be held on April 26-28, 2018 in Vladivostok. The venue is Concert and sport complex “FETISOV ARENA”.
Up-to-date infrastructure of “FETISOV ARENA” provided comfort and high-quality holding of the Expo for both – exhibitors and visitors.
Within the framework of the 25th CITY International Construction Expo the following events will take place:

On January 12, Tobias Lorentzson, Charge d’Affaires at the Swedish Embassy in Moscow, was summoned to the Russian Foreign Ministry to hear a statement of protest to the inadequate response by the Swedish authorities to the unlawful actions of Swedish citizen Leonid Karnyushin aimed the Russian Embassy and trade mission in Sweden.

On January 6, Karnyushin crashed through a gate to a parking lot in a car and then rammed the garage gate of the office and residential building of the trade mission. On January 8, he drove a truck into the main gate of the mission’s administrative building, damaging it. On January 10, he illegally entered the grounds of the Embassy, and ​​later on the same day, damaged the video surveillance equipment installed on the trade mission grounds. After each such incident, Karnyushin was detained by the Swedish police, who, however, released him after a few hours.

The Russian Foreign Ministry called the Charge d’Affaires’ attention to the Swedish authorities’ position, as they seemed to dissociate themselves from ensuring the safety and security of Russian diplomatic missions. The Russian Embassy in Stockholm repeatedly appealed to the Ministry of Foreign Affairs of Sweden asking to strengthen the physical security of Russian diplomatic facilities. However, no specific steps have been taken so far.

Karnyushin’s provocative actions are becoming more and more impudent and aggressive, which creates a direct threat to the lives and health of the diplomatic missions’ employees and their families, the Russian officials stressed.

The Swedish side was informed of the urgent need to take all appropriate measures to protect the premises of Russian diplomatic missions from any intrusion or damage and to prevent any disturbance of the peace of the missions or impairment of their dignity in accordance with the obligations undertaken by Sweden under the Vienna Convention on Diplomatic Relations of 1961.

Consequences of the act of the terror against the office and residential building of the Trade Representation of the Russian Federation in Sweden (January, 2018)

Consequences of the act of the terror against the office and residential building of the Trade Representation of the Russian Federation in Sweden (February, 2015)

With the use of materials on this page link is required

Krasnoyarsk Fair Exhibition Company invites you to take part in the 20th anniversary international specialized exhibition ExpoDrev!
The organization of this event on the Krasnoyarsk land has a number of serious advantages.
First, the Region is among the leading ones in forest resources and industrial wood. Nowadays the industry is faced with a task to increase volume of timber conversion. This means that the Region needs new technologies and new machinery for that.
Second, nowadays Krasnoyarsk region is one of the most thriving ones in Russia. There are eleven priority investment projects being successfully implemented on the territory of the region, including «Kraslesinvest», «Priangarsky LPK», «Sibles Project», «Xylotech-Siberia», Mekran Managing Company, «ForTrade», «LesService», «Sibirsky Les», Yenisey Woodworking Integrated Plant, Krasnoyarsk Center of Construction, and «Koshurnikovo».
All this proves that ExpoDrev is an effective platform for demonstration of machinery and equipment samples for logging, woodworking and furniture industry. Here you have all the conditions for promotion of cutting-edge technologies, equipment and tools for forest industry complex.

December 14th, 2017 the Trade Representation organized a business mission for representatives of the JSC “SRI of Environmental and General Design” and the Group of Companies “GSR Energo” (St. Petersburg) at the power plant Mälarenergi AB in the city Västerås. 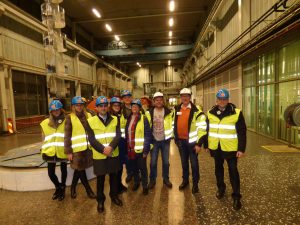 Mälarenergi AB is a regional supplier of energy and services (electricity, heat, water, cooling, Internet access, etc.), the bulk of which is produced from renewable sources, including garbage recycling. Over 90% of the energy is generated from urban and imported household waste, biomass, pellets and other renewable sources. 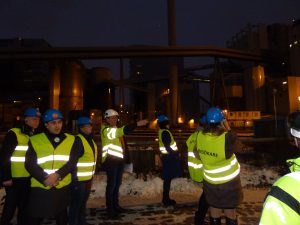 During the business mission, representatives of Russian companies studied the technology of production and supply with heat and electricity of this Swedish region, examined the economic component of construction and operation of production. The inspection of the company’s capacities for acceptance, storage, separation, shredding and use of household waste as an energy carrier was conducted.
Currently, the Trade Representation is working on the possibility of continuing work with JSC “SRI of Environmental and General Design” and GC “GSR Energo”.